An exert from a personal account of a volunteer trip….

On Sunday we stayed closer to home. A smaller group of us headed to the Sisters of Charity orphanage in Phnom Penh. I’ve been here before and it’s absolutely heart rending.

This home is run by a group of women with hearts of gold and nerves of steel. I’m not a religious person and I can’t claim to understand their motivations, but I know without a doubt that I could not do what they do.

They routinely have sick and mal-nourished babies left on their doorstep. They take in children with special needs way beyond their limited resources. They provide compassion to parents who, unable to care for their children, have abandoned them but still want to be able to visit. They work around the clock to keep everyone fed, bathed, and clothed. And still they smile.

The Sisters have been unfairly criticized in the past. A woman with a chip on her shoulder, claiming to want to help, went in to volunteer. Rather than helping the Sisters she began slandering them behind their back. No doubt she saw the same things we see on our visits: bleak, over-crowded living conditions.

It IS crowded. They have cots crammed in end to end in the sleeping section, and a tiny place to play on the floor. Some of the kids are noticeably and physically yearning to go outside, where they have limited opportunities to go. The food is probably the same day after day. The situation seems grim. It is grim. You certainly wouldn’t wish this on any child. But take another look.

The shelves are neatly organized, the floor is spotless, the children are much healthier than when they arrived, and they’re all wearing clean clothes. More importantly, watch the way the children and Sisters share a smile when they pass each other. Notice how easily this otherwise unresponsive autistic girl laughs when a Sister casually tousles her hair.

Now look into the eyes of the newest addition, a baby who looks half his actual age thanks to malnutrition, and understand why they took him in despite over-crowding. There’s nowhere else for him to go.

We visited for about two hours, enough to get in some play time, help a bit with feeding, and get an update from the Sisters. Some of the children are headed to new homes soon and we wonít see them next time. For the ones who will be still be there, we’ve brought medicines, clothing, toys, and cash donations for the Sisters (not nearly enough.)

Leaving is always excruciating and without fail there are a few of us in tears once we get back in the van. 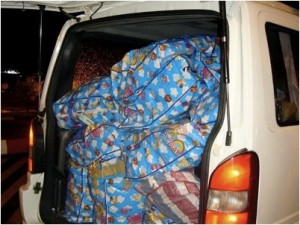